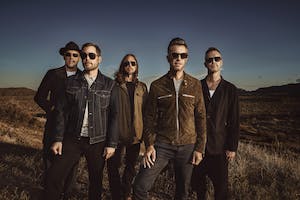 311 was formed in 1990 in the city of Omaha, Nebraska. The group still features it’s original lineup 30 years later including drummer Chad Sexton, singer / guitarist Nick Hexum, singer SA Martinez, guitarist Tim Mahoney, and bassist P-Nut. At 30 years old, 311 has become one of the longest running original lineups in rock music, joining an elite list of other original lineup units like U2 and Radiohead.

Having played over 2,000 shows across 27 countries over their 30 year career, 311 mix rock, rap, reggae and funk into their own unique hybrid sound - and have developed a reputation as one of the most entertaining & dynamic live bands in the U.S.

To honor their 30th Anniversary, and in an effort to include all of their fans in the celebration, 311 have announced that they will play concerts in all 50 U.S States this year.  The 50 Dates in 50 States Tour will kick off with a bang in February as 311 laissez le bon temps rouler at one of the world’s biggest parties - Mardi Gras in New Orleans. From there, other highlights will include a record-setting, sold out run of 3 nights of their biennial 311 DAY celebration in Las Vegas, Nevada. The more than 15,000 fans scheduled to attend come from all 50 U.S States, as well as 10 other countries. Hometown fans of the band can look forward to a special summer tribute concert in their hometown of Omaha, Nebraska in July.  However, the center piece of their "50 Dates" tour will feature one of the summer’s hottest tour packages of 2020 including Incubus, 311, and Badflower.  The 36 show run will hit most major markets this summer in Live Nation’s biggest Amphitheaters.

311 have released thirteen studio albums, two greatest hits albums, two live albums, three DVD's and a boxed-set - and have sold over 9 million copies in the U.S. Ten albums reached the Top 10 on Billboard's Top 200 Sales Chart - and nine of their singles have reached the Top 10 on Billboard's Alternative Radio Chart (including three #1 singles Down, Love Song & Don't Tread On Me - along with Amber, All Mixed Up, Come Original, Creatures For Awhile, Hey You and Sunset in July).

Summer Tour 2020 will feature Incubus, 311 and special guests Badflower. 2020 will mark 21 consecutive summers for 311 to tour the US. 311’s celebratory live shows & incessant touring schedule have earned them a massive grassroots following nationwide. Previously, 311’s annual summer headlining run, Unity Tour, became one of the most anticipated concerts of the summer, featuring such support acts as Sublime with Rome, The Offspring, Snoop Dogg, Slightly Stoopid, Cypress Hill, The Roots, Matisyahu and Ziggy Marley.

311’s feature film, Enlarged to Show Detail 3, was shown in 240 cinemas nationwide on 311 DAY (March 11, 2019). ETSD3 largely focuses on the relationship between 311 and their fans, as the film fuses together high-energy concert footage with revealing off-stage moments, including exclusive interviews and behind-the-scenes clips. More info & trailer at 311inCinemas.com. A blu-ray and streaming release are being considered for 2020.