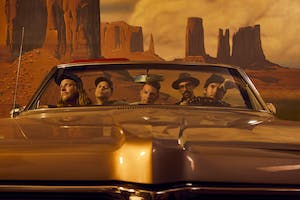 The 10-track album sweeps you away into a world of chill vibes and a nostalgic reggae influence with an alternative rock sound and feel. The Dirty Heads signature sound is all over this feature release, yet one of their timeless and most accessible music yet.  In celebration, the band reveals their new video for the melodic song “Fear and Love,” written about the irony that both are connected instead of opposites. Watch/share “Fear and Love” video HERE.

Super Moon was produced by four-time Grammy®-winning Nashville, Tennessee-based super producer Dave Cobb (A Star is Born soundtrack, Brandi Carlile, Chris Stapleton, Jason Isbell, Sturgill Simpson). It features summer anthem song “Lift Me Up,” “a classic Dirty Heads weed song,” says Jared Watson, and the title track, “Super Moon,” which he describes as “a 70’s sci-fi kung fu Western car chase soundtrack. It gives you a look into the sonics, tone, and creative narrative of this album.” Watson continues, with a deep sense of pride, “It was all recorded live in the same room to tape in Studio A in the old RCA building in Nashville, Tennessee, where legends like Johnny Cash and Elvis recorded a lot of their work.”

Inhaling alternative, hip-hop, reggae, and rock and exhaling one irresistible and infectious anthem after another, DIRTY HEADS—Jared Watson [vocals], Dustin “Duddy B” Bushnell [vocals/guitar], Jon Olazabal [percussion], Matt Ochoa [drums], and David Foral [bass]—have been redefining the sound of Southern California since 2003 and delivering hit after hit over their 16-year career. With over 1.4 billion audio streams to date, the group first made a splash with their full-length 2008 debut, Any Point In A Storm. The record yielded the RIAA gold-certified smash “Lay Me Down,” and it held #1 on the Billboard Alternative Chart for 11 weeks: longer than any single that year by any other artist. 2014’s Sound of Change earned acclaim from the likes of Esquire and bowed at #8 on the Billboard Top 200 as its first single, “My Sweet Summer,” captured #3 on Alternative Radio. Meanwhile, the band’s 2016 self-titled Dirty Heads went Top 15 on the Top 200 and spawned the smash “That’s All I Need,” which racked up over 27.5 million Spotify streams and counting. Noisey described it as“Killer.”  Beyond selling out countless shows around the world, the band headlined its ownHigh & Mighty Festival in 2017. Their sixth studio album, SWIM TEAM (2017), featured singles“Vacation” and “Celebrate,” which landed the band a performance on Jimmy Kimmel in 2018. The momentum continued with one-off hit “Visions” (2018), which climbed the radio chartsand garnered over 5 million streams, while summer anthem “Vacation” landed on the Top 10 at Alternative Radio and was the #1 most added song for two weeks straight. Additionally, the band partnered with PLUS1 in 2018 to raise over $134,000 for NRDC and The David Suzuki Foundation and also collaborated with Huntington Beach’s Four Sons Brewery to release their very own beer, Vacation Session Ale + Pineapple.