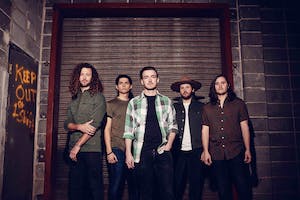 Presented By Nitefall On The River & Veridian Credit Union

LANCO continues to pave its course after the the success of their 2x PLATINUM multi-week radio chart-topper “Greatest Love Story” and critically acclaimed GOLD hit “Born To Love You.”  The five-man band’s No. One selling debut and coming-of-age album, HALLELUJAH NIGHTS, made LANCO the first Country group to debut on the Billboard Country albums charts at No. One in 10 years with their coming-of-age album. Now they have dropped two irresistibly nostalgic tracks “Old Camaro” and "What I See,” which serves as their new single at Country radio. Revealing another layer of LANCO, they fuse together a modern twist on sentimental hometown memories combined with a fresh mix of organic sounds. The new music from the ACM “New Group of the Year” follows multiple nominations from from the CMT, CMA, ACM, AMA, and iHeartAwards, while Lancaster became the first member of a group to ever win NSAI’s “Songwriter/Artist of the Year.” LANCO has already mapped out plans for the new year as their headlining WHAT I SEE TOUR  will launch Jan. 9. The new dates propel LANCO’s road-warrior mentality after hosting capacity crowds and playing over 100 shows this year including their headlining run overseas and sets at prominent festivals. The WHAT I SEE TOUR kicks off ahead of LANCO hitting the road with Miranda Lambert for her 2020 WILDCARD TOUR. For more information on LANCO and upcoming tour dates visit www.lancomusic.com.