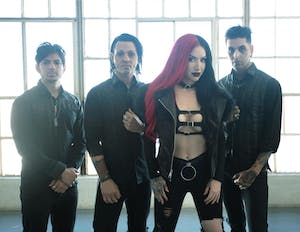 Appropriately enough for a band named New Years Day, their stunning new Unbreakable album signifies a new outlook—as well as a high-water mark for the Cali-bred lineup. Yet it was a rocky road to Unbreakable, as singer Ash Costello explains: “If I had to look at my life like a timeline of colors, when I wrote our last album, Malevolence (2015), it was pitch, charcoal black. But in the last couple years, the band cut off toxic people, built a new business team, and we’re stronger than we’ve ever been. So when we went to make Unbreakable, I wanted the process to be fun, to reflect our renewed vibe and energy,” she says. “We set out to write the poppiest metal album, or the most metal pop album.”

On Unbreakable, that mission is accomplished. It’s a dozen intense, boundary-melding songs that may touch on metal or goth, but are ultimately undeniable modern rock ‘n’ roll tunes, no-holds-barred, done the New Years Day way. The public got its first taste of Unbreakable in November 2018, with the booming, ultra-dynamic “Skeletons.” The song surpassed 1 million worldwide streams, the first proof that Unbreakable was going to be unbeatable. “Shut Up,” with ultra-melodic, breathy vocals and a hardcore message, plus the dark taunt and industrial grind of ‘Come For Me,” with its irresistible chorus, capture a young band in its creative prime, and a singer solidly in charge of her vision.

Costello, raised in Anaheim, grew up worshiping the powerful voice and presence of another local girl: No Doubt’s Gwen Stefani. Like her childhood idol, Costello was singing in bands by high school. But it wasn’t until a few years into NYD’s career that everything gelled. “I feel like New Years Day was really born when our EP Epidemic (2014) came out; it was the first taste of who we really are,” Costello says. “Everything before that feels like a different band, and technically was. Then Malevolence came out, it was sort of our punch in the dick to the music industry, and we did our first headlining tour in 2015.” Malevolence hit #45 on the Billboard 200, thanks to the radio hits "Defame Me" and “Kill Or Be Killed." In 2017, the band headlined the Vans Warped Tour; did a month-long festival run with Halestorm; and appeared on the Punk Goes Pop compilation, covering Kehlani's "Gangsta" from the movie Suicide Squad.

Unbreakable showcases a New Years Day stripped bare—literally. The “boys in the band” left behind their white face makeup, which all admit was somewhat of a “safety blanket.” Likewise, Costello stripped down her songwriting. “I used to think lyrics needed to have metaphorical veils and be super-dense and paint a picture but leave it up to the interpretation.” But for Unbreakable, she says with characteristic forthrightness: “I was, ‘fuck that, I’m literally going to say exactly what I want to say.’ Yeah, there’s some metaphorical stuff, but this is me moving into a more literal direction.”

Songs like “Shut Up” blend a musical vulnerability with tough lyrics, not an easy task. But thanks in part to doing covers—of Kehalni, Pantera and others—New Years Day discovered their own versatility and creativity. “We made those songs work for our band, and that was the first time I realized we could go that direction in our own writing, make the super-melodic and the dirty, ratchety stuff work together. ‘Shut Up’ was written in a day, which just doesn’t happen. I was going through some heavy personal stuff, and I was just, ‘don’t tell me what I want, shut up and give it to me!’”

If “Shut Up” was nearly instantaneous, “Come For Me” took a year to write. It’s truly a fight song-- “If you have a problem with me, I’ll put you on the guest list, come for me; we’ll fight it out,” offers up Costello. But? “It also sounds dirty,” she laughs. “I’m just trying to write songs that strippers can strip to: a good beat and some sexy-ass lyrics!”

The dichotomy between Costello’s two sides—embodied in her red and black hair, and even her tattoos (one side inked, the other not) has coalesced in the songs on Unbreakable. But the painful part of the creative journey to Unbreakable began long before “Skeletons” was written. Before writing “Skeletons” in 2018, NYD did an album’s worth of songs…. then threw them out. Literally.

“It wasn’t someone who else told us they didn’t like our record. It was US, the band, saying ‘THIS IS NOT IT,’” Costello recalls. New Years Day weren’t feeling that elusive “it” midway through the process. Yet Costello “was trying to be hopeful and stick it out.” The turning point came in 2017 when NYD listened to their effort from start to finish with their old business team, and it didn’t feel good or right. So, in a moment of bravery— “a very scary moment,” NYD canned the record and their business affiliations. “I trust the universe,” says Costello. “And it took us where we needed to go. That door was meant to close that day. That group of songs are gone. But Unbreakable came out of it, and also our new label and management. “It was about taking control of our art. We did, and everything good followed.”

A couple of those good things were writers/producers Mitch Marlow (All That Remains, In This Moment) and Scott Stevens (Halestorm, Shinedown). Each were writing with Costello, but she brought the pair, who had never met, together. “Both became producers and ended up splitting the album, which is unheard of. But they were super passionate about me as an artist and the band, the record, and what we have built,” Costello says. “They fit like puzzle pieces. Marlow brings the blood and guts, Stevens the melodies. “You put the two guys together, and I’m the person who embodies both sides, musically. I’m a little horror, a little blood and guts, and a little ‘I love Mickey Mouse’ happy. It’s a little ugly, it’s a little pretty. Now the music is finally reflecting that. “

The risk New Years Day’s took has earned them copious rewards, and those “pitch, charcoal” days—which were equally daunting times for guitarist Nikki Misery and bassist Frankie Sil—are in the rear view. There were times when Costello felt she might not survive—”and it shows in Malevolence. But the past couple years, the communication among the band is incredible. We’ve got this shit. We’re tight. We’ve lifted ourselves out of the dirt.”