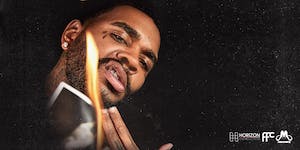 The past dictates the present, but we determine the future. By confronting yesterday, learning its lessons, gaining its wisdom, and ultimately moving ahead, Kevin Gates sheds skin and steps into who he was always meant to be for tomorrow on his second full-length album, I’m Him [Breadwinners’ Association/Atlantic Records]. The multi-platinum award-nominated Baton Rouge artist undergoes a personal, spiritual, and creative transformation. It starts with just two simple words...

Kevin keeps pushing forward. Not only does he do so for himself and his family, but he does so for hip-hop. After a string of successful mixtapes since 2007, he ascended to the forefront of the culture on his 2016 double-platinum debut album, ISLAH. In its wake, he emerged as “one of the best-selling hip-hop artists of 2016,” second only to Drake. It bowed at #2 on the Billboard Top 200 and yielded the quadruple-platinum “2 Phones,” triple-platinum “Really Really,” in addition to several platinum and gold certified tracks. Pitchfork lauded it among “Best New Music,” it graced year-end lists by Billboard and Complex, and it garnered a nod for “Best Rap Album” at the 2017 Billboard Music Awards.

Despite a 2017 incarceration, his wife Dreka orchestrated the release of By Any Means 2, and the mixtape crashed the Top 200 at #4. Upon release in 2018, the rapper celebrated a triumphant homecoming by reclaiming the same chart position on the mixtape Luca Brasi 3 and spawning the gold-selling “Me Too.” He sold out the Luca Brasi 3 Tour and delivered standout performances everywhere from JMBLYA to Rolling Loud before joining Cardi B on a string of arena dates.

By 2019, total streams exceeded 5 billion as he achieved dozens of gold and platinum certifications. He maintained his prolific musical output with the EP, Only the Generals Gon Understand, but the real work happened at home in the mirror.

“When I got home, I was crying out on the inside for help,” he admits. “On the outside, I had a wall up. I didn’t want to let anybody in. Thank God for my wife. She did everything to get through to me. We went down the rabbit hole together. I ended up speaking on subject matters I would’ve never spoken on. It was a lot of constructive criticism. I was finally willing to accept the criticism and admit my actions weren’t right. I was 310 pounds after I got out. I replaced my negative habits like drugs, eating the wrong food, and living a selfish destructive lifestyle with positive habits like working out. I’m 205 pounds now. I decided there’s another way.”

Propelled by airy guitar, skittering whistles, and an ominous beat, the first single “Push It” pulls no punches. He delivers hard-hitting verses before dropping a breathless and bold heavyweight hook. The track and accompanying music video directly address the internal battle.

“‘Push It’ is all about conquering yourself,” he explains. “Sometimes, your biggest obstacle is you. A warrior’s greatest gold is truth. In the Muhammed Ali way, I’m going to show you how great I am. The idea for the video was presented to me, and it was so beautiful. It just speaks. This is me fighting the old Kevin and becoming the new Kevin. I’m making the transition from a fucked up guy with a good heart and great character traits into a man with a great heart and no fucked up character traits. It’s opening the process for the world to see. It starts here.”

Meanwhile, the follow-up single “Facts” doubles as a lyrical catharsis. Fiery flows blaze toward a melodic emotional release on the chorus.

“It’s just me venting about everything,” he says. “It’s all facts. Sometimes, venting is the best thing you can do to cleanse your heart. I’m not going to let the pain from my past affect my future. You need to let go of unresolved grief. Don’t keep it all bottled inside.”

Kevin shares everything on I’m Him. It represents yet another milestone for him as a rapper and the leader of Breadwinners’ Association, building a platform for those around him to succeed and flourish.

In the end, the future looks brighter than ever for Kevin.

“I want the world to realize the solution is never found outward, it’s always inward,” he leaves off. “In order to begin your healing process, you have to look inside. That’s what I want people to take away from I’m Him. I wasn’t afraid to conquer my old self. There’s no such thing as a mistake. When you follow your heart, you learn from them. Life isn’t a race to see who gets to the finish line first. It’s a long journey. The reward is the journey. I’m starting to really enjoy my journey.”