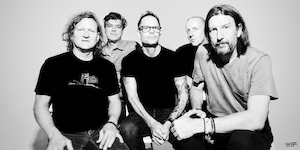 iCal
Google
Gin Blossoms will be performing at Wooly's on Friday, April 23rd, 2021.

Gin Blossoms' blockbuster 1992 album New Miserable Experience spawned four Top 40 hit singles, and established the Arizona quintet as one of the top rock groups of that decade. More than 25 years have passed since the release of New Mis, and now Gin Blossoms are back with their best set of songs in years. Produced by Don Dixon and engineered by Mitch Easter, Mixed Reality (set for release June 15) demonstrates that the timeless appeal of Gin Blossoms' music has endured.

Gin Blossoms formed in 1987 in the Arizona city of Tempe; guitarists Jesse Valenzuela and bassist Bill Leen were founding members. After some lineup changes, the group coalesced around Valenzuela, Leen, Robin Wilson (vocals and guitar), drummer Phillip Rhoades, and guitarist Doug Hopkins. One quality that set Gin Blossoms apart from other groups was its deep bench: four of its five members wrote songs. And while each musician would bring his unique songwriting sensibility to the group, somehow the tunes all came together, creating a whole far greater than the sum of its parts.

In 1989 Gin Blossoms released its debut album, Dusted, on a small Tucson-based independent label. The album included two Doug Hopkins-penned songs, “Found Out About You” and “Hey Jealousy.” The band gigged regionally in support of the album; live shows of that era showcased the young group's versatility and strength in songwriting, musicianship and vocals. Gin Blossoms' appearance at SXSW brought the band to the attention of major labels who began courting the band for a record deal.

Along with its original songs, the band became known for its high-energy, loose and informal shows full of lively stage banter; a typical set list of that era might include irreverent, left-field cover versions of “If I Only Had a Brain” from The Wizard of Oz, the Beatles' “A Hard Day's Night” and Loudon Wainwright III's “Dead Skunk in the Middle of the Road.”

In 1990 the group signed a contract with A&M Records. Before recording a full-length, the band cut a five-song EP for the label; Up and Crumbling featured songs that had been in the group's set for some time, and included Robin Wilson's “Allison Road.”

Ten months later, Gin Blossoms' major-label debut album, New Miserable Experience was released. The album included a dozen songs written variously by Hopkins, Valenzuela and Wilson. Working with producer John Hampton, the band recorded six new songs plus new versions of six tunes that had appeared on Dusted and the EP; the result may have been new to listeners across the country and beyond, but for local fans NME was almost a greatest-hits collection.