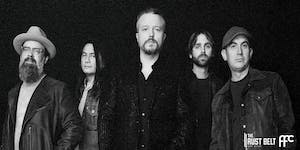 Jason Isbell and the 400 Unit

iCal
Google
Jason Isbell And The 400 Unit will be performing at The Rust Belt on Saturday, April 17th, 2021.

About Jason Isbell And The 400 Unit

Jason Isbell and the 400 Unit’s new album, The Nashville Sound, is a beautiful piece of American music-making, but watch yourself: it will light a fire under your ass. “You’re still breathing, it’s not too late,” Jason sings.

This album is a call, and the songs on it send sparks flying into a culture that’s already running so hot the needle on the temperature gauge is bouncing erratically in the red. And while it’s understandable that, in this moment, some people want their radio to help them drift away, this finely calibrated set of ten songs is aimed right between the clear eyes of people who prefer to stay present and awake. It’s a call to those who won't cower no matter how erratically the world turns, and who aren’t afraid of what looks back when they look in the mirror. Bruce Springsteen did that. Neil Young did that. Jason Isbell does that.

There are songs on this album that cut to the chase. “Last year was a son of a bitch for nearly everyone we know,” Isbell sings on the album’s first single, “Hope the High Road.” “But I ain’t fighting with you down in the ditch. I’ll meet you up here on the road.” As singular as that lyric is, there’s nothing coy or obtuse about it. Meanwhile, other songs here take a subtler tack.

Check out track three, “Tupelo.” It plays like a warm ode to Northeast Mississippi—on the first few listens, it sure sounds like a loving tribute—but on the fourth you realize that the town the protagonist is extolling is actually a blazing hellhole. Perfect—as a hideout, anyway. “You get about a week of spring and the summer is blistering,” Isbell sings. “There ain’t no one from here who will follow me there.” It’s the kind of twist that compels the fifth listen—and the fiftieth.

As with Isbell’s 2013 breakthrough, Southeastern, and his double-Grammy-winning follow up, 2015’s Something More Than Free, The Nashville Sound was produced by Dave Cobb. Isbell says that he and Cobb created a simple litmus test for the decisions they made in the two weeks they spent at RCA Studios (which was known as “The home of the Nashville Sound” back in the ’60’s and ’70s): they only made sonic moves that their heroes from back in the day could’ve made, but simply never did. It’s a shrewd approach—an honest way to keep the wiz-bang of modern recording technology at arms length, while also leaving the old bag of retro rock ’n’ roll tricks un-rummaged. Lyrically, The Nashville Sound is timely. Musically, it is timeless.

It’s also worth noting that this album isn’t credited to Isbell alone. For the first time since 2011’s Here We Rest, Isbell’s band, the 400 Unit, gets title billing. “Even when I was writing, I could always hear the band’s stamp on the finished product,” Jason says. “These songs needed more collaboration on the arrangements to make them work, and I felt like the band deserved it after the way they played.” Given Cobb’s strict insistence on cutting songs live with no demos or rehearsals, you can easily imagine how the brilliantly raw performances on the record will translate to the stage when the band takes these new songs out on the road.

And boy, there’s nothing like a 400 Unit show. Not just because the band smokes, but also because Isbell’s fans are among music’s most ardent. They listen to these songs for months and months on their own, and that momentum rolls them right up to the doors at the Ryman Auditorium in Nashville, or the Beacon Theatre in New York or the Fabulous Fox Theatre in Atlanta. And when the band kicks in, they are ecstatic. It’s a rock ’n’ roll show that feels like fellowship.

Which begs a question: Why do Jason’s songs strike us so deeply? What makes this music of the soul?

The answer has to do with Jason’s authenticity, his intellect, his rootedness in both tradition (see: the childhood in Green Hill, Alabama, near Muscle Shoals, where he grew up picking and singing in the style he remembers here on “Something To Love”) as well as modernity (see: Jason singing about anxiety, or his complicated relationship to his iPhone).

Simply put, Jason has a gift for taking big, messy human experiences and compressing them into badass little combustible packages made of rhythm, melody and madly efficient language. The songs are full of little hooks—it could be guitar line that catches one listener, or a quick lyric that strikes to the heart of another—and an act of transference takes place. The stories Jason tells become our own. The music is coming not from Jason and the band, but from within us.

As you listen to this record, you will hear many themes: humor, heartache, wisdom, beauty, hope. But chief among them, strangely, is leadership.

If Southeastern (2013) was the Getting Sober record (Jason has been searingly honest in both songs and interviews about the time he spent in rehab), and Something More Than Free (2015) was the New Clarity record, maybe this one, The Nashville Sound, is the Way Forward.

And who better to lead us forward than Jason Isbell? Jason is a relentless and fearless self-interrogator. (The first line of “Cumberland Gap”—“There’s an answer here if I look hard enough”—will be familiar to those who know him.) And this album is a challenge, a gauntlet in song: Let’s claim ownership of our biases (“White Man’s World”). Let’s embrace and celebrate the uncomfortable idea that the force that activates both life and love is death (the instant-classic “If We Were Vampires”). Let’s consciously choose light over darkness (“Hope the High Road”). And for God’s sake, if you are feeling anxious, alone, disenfranchised, depressed, mad as hell, or scared as shit, find something that gasses you up and work at it (“Something to Love”). Jason, it seems, after years grinding the rail that separates terra firma from the brink, has put in the sweat equity it takes to hug it out with his demons and fill his life with meaning, bright and clean.

If that sounds good to you, this album lights the path.

About Strand Of Oaks

Strand Of Oaks, led by Philadelphia's Tim Showalter, will release its new album 'Hard Love' on February 17 on Dead Oceans. On the highly anticipated follow up to 2014's 'HEAL', Showalter confronts the struggle between overindulgence and accountability; while he yearns for rock 'n' roll transcendence, he is also forced to confront the damage that pursuit inevitably imposes on his loved ones. With help from producer Nicolas Vernhes (The War on Drugs, Spoon) and guitarist Jason Anderson, 'Hard Love' harnesses Showalter's unrelenting energy and channels it into nine of the most incendiary, ambitious songs in Strand Of Oaks’ discography.

“Some records are built like monuments, set in stone,” says Showalter. “I want this record to be burned in effigy, in celebration of the limited time we have on this earth.”

Lead single “Radio Kids” comes with a beautifully shot video directed by Christopher Good. NPR Music says: “Just like that favorite song you’ve held onto for so many years, evoking memories of the past, 'Radio Kids' is the kind of song you want to listen to over and over.” Watch “Radio Kids” here: http://bit.ly/2fSgk4Y

'Hard Love' walks a tightrope of emotions — from rock ‘n' roll abandon to harrowing self-reflection — and Showalter has lived every minute of it. From a life-changing psychedelic awakening at the Boogie Festival in Australia ("On The Hill") to his own domestic troubles (“Hard Love”) and the near-death of his brother from cardiac arrest (“Taking Acid and Talking With My Brother"), 'Hard Love' is a sledgehammer of a record rife with unrestrained sonic expression.

Written and conceptualized during Showalter’s post-tour break as he reveled in what he considered to be a life-changing experience, the initial sessions for ‘Hard Love’ were scrapped. Showalter brought in producer Nicolas Vernhes to capture the loose, hedonistic vibe he was searching for. “In a time of calculation and overthinking, I wanted to bring back the raw, impulsive nature that is the DNA of so many records I love,” says Showalter, who draws from his love of Creation Records, Trojan dub tapes and Jane’s Addiction throughout the album’s nine tracks.

But that rocking intensity is tempered by the wounded ballad “Cry,” a sobering moment of clarity that serves as the emotional fulcrum of the record. It’s this strain of honesty and self-reflection that helps mark ‘Hard Love’ as the most fearless work of Showalter’s career — a growing up record that lobbies just as hard for holding on to youthful foibles.

‘Hard Love’ is the follow-up to 2014's ‘HEAL,’ deemed "some of the best new music of the year" by NPR, a "heart-on-sleeve vision quest" by Grantland, and simply “a rock ‘n’ roll masterpiece” by AV Club, leading to performances everywhere from Newport Folk and Primavera to Late Night with Seth Meyers and NPR's Tiny Desk.