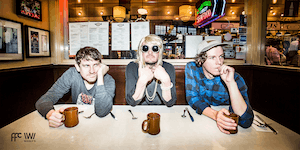 STRFKR has always been a constantly evolving entity, growing over the years from rambunctious beginnings in the manicured electro-pop perfection they exhibited on their last studio album, 2016's pristine Being No One, Going Nowhere. New single "Never The Same" is a hsarp left turn from anything the band has explored before, hitting hard with a minimal arrangement of acoustic guitars, stripped down drums and Josh Hodges' familiar weightless vocals all bathed in lo-fi production. The song is warm and direct, with twisting melodies and a straightforward delivery that highlights how vulnerable the band's lyrics can be. This kind of careful, hushed energy is new territory for STRFKR, and it's a risky move for a band loved for their exclamatory synth pop. Going out on this ledge results in one of the band's most immediate and rewarding songs, one that's strange and beautiful but as intense as a secret being whispered in your ear.