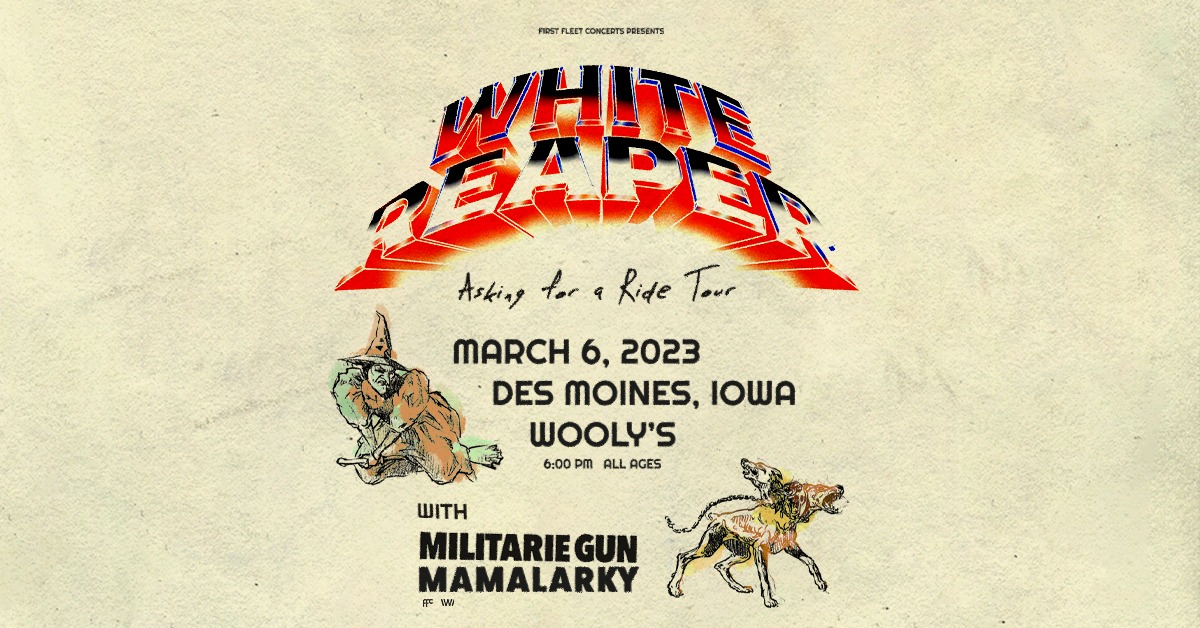 The bold statement from Louisville’s White Reaper is not only the title of their new album, but also the band’s credo.

“Because we are the best,” says guitarist/vocalist Tony Esposito. “Just like Muhammad Ali was the greatest, you gotta say it out loud for people to believe it."

And with that mentality the band hit the studio with close friend and producer Kevin Ratterman (My Morning Jacket, Young Widows) and made a good ol' fashioned in-your-face rock ’n’ roll record.

“We didn’t make this record or start this band because we wanted to come across in a single, certain way," says Esposito. “We just make records that we'd want to hear. We started doing this because it's fun as hell, just as much now as it was when we were 14."

Boasting textured melodies, layered guitars and more seasoned lyrics, The World’s Best American Band finds the quartet busting out of the basement sound established on their previous full length (2015’s White Reaper Does It Again) and setting their sights on the arena.

Garnished with glimpses of the golden age of rock and roll, TWBAB is loaded with guitars that scream and gigantic drums in lockstep rhythm, each song packing its own massive, but none the less unique, punch. Lead single “Judy French” struts like a runway model raised on Heavy Metal Parking Lot, while midway point “The Stack” pairs a classic rock shimmy with a flair for glam.

The Kentucky boys eagerly await hitting the road in 2017. Armed with a record that celebrates rock in all of its glory, they are poised to satisfy crowds whether they are packed shoulder-to-shoulder in the "standing room only" pit or kicking back in the cheap seats.

“Come to the show, have a drink, have fun,” laughs Esposito. “But be nice to everybody, cause you're gonna get real close."

Concert tickets? 🤔 Yes please! 🙌 🎫 firstfleetconcerts.com
Just Announced! Get ready for a country takeover with Creed Fisher at Wildwood in Iowa City, Iowa on Friday, March 17th! 🤩 Tickets on sale now.
On Friday, March 3rd you could be in the crowd for White Reaper and special guests Militarie Gun & Mamalarky at The Waiting Room Lounge in Omaha, NE! 👀 Get your tickets today! 🎫 firstfleetconcerts.com
On sale now 👉 Niko Moon!
Are you ready?! 👀 It's almost time for Steve Vai to take over Hoyt Sherman Place tonight in Des Moines, Iowa! 🌟 Doors: 7:00 PM // Show: 8:00 PM // All Ages
Just Announced! Niko Moon will bring his Ain't No Better Place Tour to Hoyt Sherman Place in Des Moines, Iowa on Saturday, March 25th with special guest Dylan Schneider! ☀️ Tickets on sale Tuesday, November 22nd at 10:00 AM on our website! Get your tickets extra early using the code NMDESMOINES today from 12:00 PM to 10:00 PM.
Tonight in Des Moines, Iowa, Daniel Nunnelee and Noah Pope will be at xBk!! ✨ Don’t miss your chance to grab tickets!! Doors: 6:00 PM // Show: 7:00 PM // All Ages
Make your Friday better with concert tickets! 🥳
Tonight! Don't miss Granger Smith featuring Earl Dibbles Jr. 🔥 He will be joined by Chris Colston and Joe Stamm Band at Val Air Ballroom in West Des Moines, Iowa! Remember to grab your tickets! 👇 Doors: 6:00 PM // Show: 7:00 PM // All Ages
Don’t miss out on this one! 👀 We’re giving away a signed tour poster and a pair of tickets to Daniel Nunnelee at xBk in Des Moines, Iowa this Saturday, November 19th! 🎫 To enter: 👉 Follow @firstfleetconcerts & @xbklive 👉 Like this post! 👉 Tag who you’d bring to the show. Winner will be chosen Friday, November 18th! *CONTEST CLOSED*
One week from today Steve Vai will step foot on the Hoyt Sherman Place stage in Des Moines, Iowa on November 22nd! 🤯 Do you have your tickets yet? 🎫 firstfleetconcerts.com
Just Announced! Iowa born country musician Hailey Whitters is on tour with Stephen Wilson Jr. next spring! 🌷 Don't miss their stop at Wildwood Smokehouse & Saloon in Iowa City, Iowa on Thursday, March 30th, 2023! Tickets on sale Friday, November 18th at 10:00 AM.
It's show day at xBk Live! 🎉 Don't miss Charlie Burg and special guest Genevieve Stokes tonight in Des Moines, Iowa! Doors: 7:00 PM // Show: 8:00 PM // All Ages
Who's ready to rock with tonight's lineup?! 🤘 Trinity of Terror Tour is taking over Alliant Energy PowerHouse in Cedar Rapids, Iowa featuring MOTIONLESS IN WHITE, Black Veil Brides & Ice Nine Kills and special guest Atreyu! Make sure you've got your tickets! 🎸 Doors: 5:30 PM // Show: 6:20 PM // All Ages
Our on sales are here! 🥳
Do you have your tickets for Daniel Nunnelee with special guest Noah Pope at xBk on Saturday, November 19th?! 🎵 Don’t miss out as the More Lovely Together Tour rolls through Des Moines, Iowa! 🎫 firstfleetconcerts.com
Need tickets for Trinity of Terror Tour at Alliant Energy PowerHouse in Cedar Rapids, Iowa this Friday?🧟 We've got you covered! For a limited time, get two tickets for the price of one starting now through Thursday, November 11th at 10 PM. Use code SAVIOR See you soon! 👋
Just Announced! Los Angeles based standup comedian Laura Peek is bringing laughter to TeeHee's Comedy Club for TWO nights - Friday, January 6th & Saturday, January 7th, 2023! 🤣 Tickets on sale Friday, November 11th at 10:00 AM.
Get your concert plans in for 2023! 🌟
Next Friday, Charlie Burg will be at xBk and we've got the giveaway package that makes the week long wait infinitely better! 💙 Enter below to win the VIP experience for two & Charlie Burg merch! Entry tasks: 🌻 Like this post 🌻 Follow @firstfleetconcerts - @xbklive - @burgchar 🌻 Comment who you would take with you and include your favorite song off of Burg's latest album 'Infinitely Tall' 🌻 Share this post to your story for an extra entry What's included? ⭐ GA Ticket ⭐ Meet & Greet ⭐ Early Entry ⭐ Merch & Vinyl CONTEST CLOSED ** Contest not affiliated with Instagram.
Did you catch the 2023 Hinterland Music Festival lineup? 👀 🌟 August still may be a ways away BUT you can get festival passes right now! Hinterland Music Festival | August 4th - 6th, 2023 | Avenue of the Saints Amphitheater in St. Charles, Iowa See you there! 👋